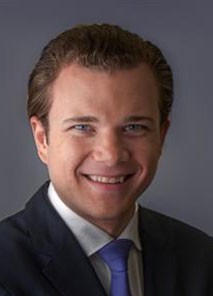 Travis joined Ritch & Conolly in 2015 as an Associate in the Litigation Department upon qualification as a Cayman Islands Attorney-at-Law. He completed his legal training in Litigation, Corporate, Funds and Finance practice during 2013 and 2014 at the Cayman Islands offices of leading offshore firms Harney Westwood & Riegels and Mourant Ozannes. He is a graduate of King’s College, London (LL.B) and was called to the Bar of England and Wales in 2011 upon completion of the Bar Professional Training Course at City Law School (formerly the Inns of Court School of Law). Prior to university, Travis was educated in the Cayman Islands, Massachusetts, USA and Ontario, Canada.

Between 2011 and 2013 Travis worked as a Paralegal in the firm’s Litigation Department.
Travis gained experience of significant insolvency, commercial and civil litigation both before and during his training. He worked on the US$500m liquidation of the SPhinX Group of Companies in which the firm acted for the Joint Official Liquidators; on behalf of the special assets division of a Florida bank in a US$70m fraudulent dispositions claim against a well-known real estate developer; and on behalf of the principal of an exempted company valued at US$1bn in proceedings (including a three-week trial) for the winding-up of that company issued by a joint venture partner.

Travis has provided research, drafting and other support to senior litigators and to leading London Counsel since 2011 on a variety of matters similar to those described above including those with cross-border or particularly sensitive elements, including urgent work on expert reports required for foreign proceedings, and other special projects.

Travis is developing his practice and is available, together with the firm’s other attorneys or on his own, to assist with a wide variety of matters. He was heavily involved in the firm's legal review of the regime for the grant of permanent residence with the right to work following the decision of the Grand Court in the matter of Hutchinson-Green v Immigration Appeals Tribunal (2015 (2) CILR 75), commissioned by the Cayman Islands Government. The review concluded in May 2016. He regularly acts for and advises statutory authorities and Class A banks in contentious and non-contentious matters. He has also appeared in the Summary Court.

In August 2016, Travis was appointed as a Deputy Chairman of the Planning Appeals Tribunal for Grand Cayman, which hears appeals from decisions of the Central Planning Authority pursuant to the provisions of the Development and Planning Law.